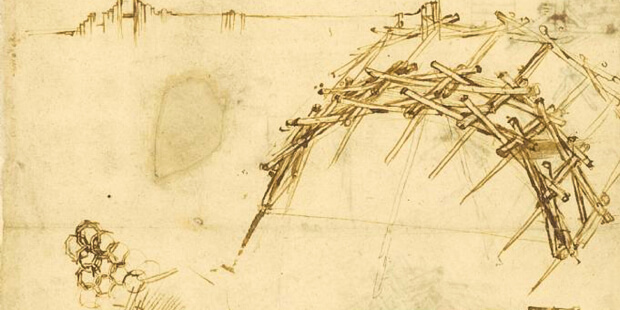 Turkish Sultan Bayezid II put out the call for a bridge design that would connect Istanbul and Galata, a neighbouring city, in 1502. It would have been the world’s longest bridge span in history at that time, and Leonardo da Vinci sent in a proposal. He didn’t get the job.

It’s been 500 years since the world lost Da Vinci, and researchers at the Massachusetts Institute of Technology decided to test his concept to see if it would’ve worked. Karly Bast, a recent graduate student of mechanical engineering, worked alongside John Ochsendorf, Professor of Architecture and Civil and Environmental Engineering, and undergraduate Michelle Xie. They analysed all the information available from that time and created a detailed model to scale to test whether the structure would have been able to support the weight it needed to and remain standing.

It was then as pioneering an idea as betting sites for mobile were just a few short years ago. It would have been roughly 280 meters long, about 10X the length of typical viaducts back then.

No Information on Materials

Because Da Vinci provided no information on what type of materials would’ve been used, Bast and her team investigated different mediums typical of the period. They concluded that only stone could’ve been used in a project of this size. They then built a model to demonstrate its stability, building it to a scale of 1:500, using 126 blocks for their aqueduct. Each block was made using a 3D printer and Bast said that although it was a time-consuming process, it allowed for a very accurate recreation of incredibly complex geometry.

Bast reported that the structure is held together by compression alone. She said that she and her team wanted to communicate the idea that forces are all transferred within the edifice itself, a key factor which ensured that the bridge would not topple.

It was very similar to the construction of an actual masonry arch flyover. The pieces were all supported by a scaffolding structure, and only once they were all in place could this be removed to see if the building would support itself. The final test came with the insertion of the final piece, the keystone of the arch.

Bast spoke of having to squeeze it in and said that this moment was the most important one. She confessed that she had more than a few doubts about the bridge’s workability until that point. After the scaffolding was then taken out, and the edifice remained standing, the power of geometry was revealed. She described Da Vinci’s concept as a very strong one and said that it had obviously been very well thought out.

While the great polymath’s design has no practical implications for the advanced bridge designers in today’s modern world, it gives us one more piece of evidence of the sheer brilliance of the Italian who was born in 1452. Bast said it also showed that one doesn’t necessarily need intricate technology to come up with incredible ideas.