In terms of climate change, one of the biggest problems that the human race faces right now is the amount of carbon dioxide that’s in the atmosphere.

Carbon dioxide release is a natural part of the earth’s cycle; there are thousands of processes occurring every year that release carbon, and for the most part, the planet has plenty of ways of scrubbing it back down.

But since the Industrial Revolution, mankind has been receiving significantly more carbon into the air than the biosphere is properly able to compensate for. These huge amounts of carbon come at a high price: they are able to capture and hold onto heat in the air, effectively creating a greenhouse effect that’s slowly but surely increasing global temperatures.

Finding ways to remove the carbon dioxide from the atmosphere has never been more important, but fortunately there are some ideas underway to do just that. 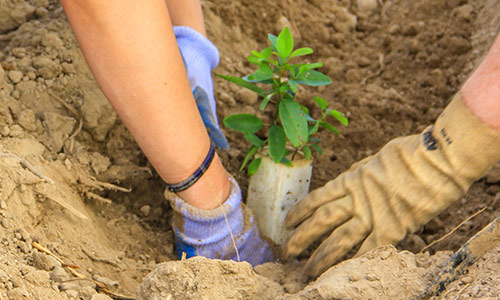 For all of our technology, natura still has a better method of fixing the mistakes that we’ve made over the last few hundred years, and when it comes to removing carbon, nothing works as well as a forest.

Photosynthesis is the natural process of turning carbon dioxide and water into energy that the plant can use and releasing oxygen as a by-product. Forests are so good at sequestering carbon that most experts believe that planting more forests around the world may be the only method of successfully scrubbing the incredible amounts of carbon in the air. Reforestation projects are currently underway across the globe to help face this issue.

Direct air capture is a method of chemically removing carbon from the ambient air around us, after which it’s stored in carbon capture banks that are usually kept underground. It’s among the most straightforward ways of geoengineering the world around us to help solve the carbon crisis, although the scale needed to make any sort of real difference would be extremely costly to governments around the world.

Along with this, there are heat and energy requirements that may keep the technologies required at bay, at least for the time being, although it’s possible for certain fundraising methods, such as to buy Bitcoin, to generate enough funds in the future.

The soil below us is excellent at capturing and storing carbon, but decades of commercialised and industrialised methods of farming have left most of the earth’s soil unable to capture as much carbon as it was once able to.

It’s believed that a switch over to a new type of sustainable farming, one that focuses on regenerative soil practises would mean that healthier soils would be much more suited to taking in carbon from the air.

The impact here is greatly underappreciated; soil, per hectare, is extremely efficient at taking in CO2, and having better topsoil globally would make a marked difference at how much CO2 we have in the atmosphere. Planting large areas of groundcover between harvests, for example, would go a long way at bringing otherwise dead soil back to life, and giving it the carbon capture properties that it once boasted.