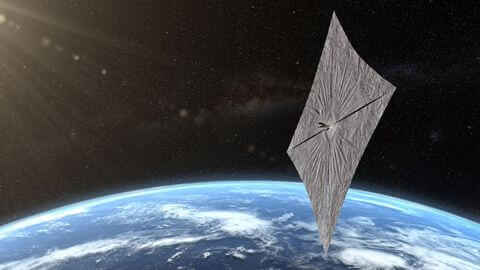 LightSail 2 is the third spacecraft to be launched as part of the organisation’s LightSail programme. The craft was sent into orbit on June 25 this year, and has been in orbit of Earth ever since, waiting to deploy its sails while sending some fascinating pictures of our planet back down to its creators on the ground. Online betting NZ might be highly entertaining, but nothing quite compares to seeing full images of our planet with our own eyes!

According to TPS, sail deployment for the LightSail 2 was a manual, two-step procedure that was initiated by its ground systems team. First, the team was tasked with ‘arming’ the sail for its deployment, after which they sent instructions for the sail to be deployed. Telemetry then showed an increase in motor counts, confirming that the craft was indeed in full operation.

How LightSail 2 Propels Itself Through Space

The sail used by LightSail 2 actually consists of a system of 4 triangular sails that constitute a single, larger square sail when launched. Once deployed, the craft’s sail measured 32 square meters (340 square feet) in total, and can be used to raise its orbit. Of course, this perfectly demonstrates the power and potential future applications of solar sail technology.

Altogether, solar sail technology and the concept behind it is theoretically quite simple. A solar sail uses the momentum of photons from the sun to move, much like a real sail boat utilises energy from the wind. However, light sails don’t actually capture photons; rather, the photons bounce off their reflective surfaces and propel the sail that way.

Needless to say, this simplistic and lightweight technology has boundless potential. It works perfectly well in space, and as there is no resistance to the craft’s momentum because of the vacuum of space itself, its speed increases as more and more photons bounce off the sail. All of this can be achieved without any need for fuel or propulsion systems that could become damaged or dysfunctional over time.

In certain ways, solar sails can be compared directly to the sails on a boat. This interplanetary sail can be aimed at different angles to direct the craft’s travel; if the sails are aimed directly at the sun, the craft will travel away from it. By ‘tacking’ or changing the sails’ angles, a spacecraft using this technology can essentially propel and steer itself through our Solar System – and perhaps even beyond it – with ease.

As mentioned above, solar sails also continue to gather momentum as they travel, accelerating as long as more photons continue to hit them. A solar sail-powered craft can reach speeds that chemical rockets will never be able to achieve, especially since the latter cannot break through the gravitational pull of Earth without assistance. With that said, a solar sail’s momentum cannot increase indefinitely, and the further a sail gets from the sun, the more its rate of acceleration would decrease.

It is for these reasons that solar sails are ideal for longer space journeys, where their brilliant independent propulsion system will really come in handy. Scientists have even suggested that pointing lasers at the sails could help them to accelerate even further – but for now, we will simply have to see how far LightSail 2 and its technology can assist us in our unquenchable quest to conquer outer space.